By default, if all the values of a variable are numbers, then that variable will be treated as as a numeric variable. 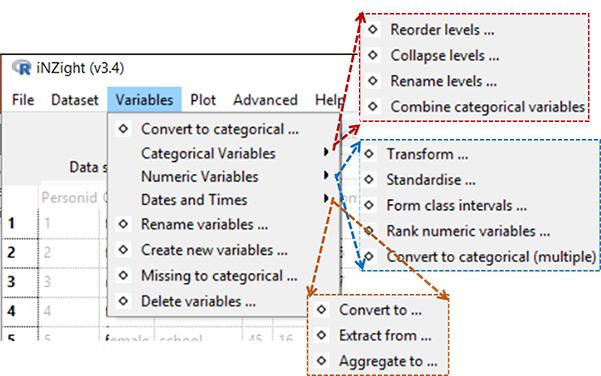 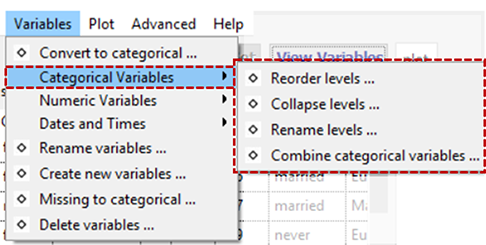 Combine levels within a categorical parent variable to make a new variable with a smaller number of levels. (The levels of a categorical variable are the set of unique, or distinct, values it takes).

Creates a new variable that is a transformed version of the parent variable. Transformations available are log (base e or base 10), exponential, square, square root and reciprocal.

Create a standardised version of a variable (or z-score) by subtracting the mean of the variable from each value and dividing by its standard deviation.

Creates a new numeric variable containing the rank, or order of the selected variable. This is often used when the order of the values (but not the values themselves) is of interest.

This has the same result as the previous "Convert to Categorical" tool, however it allows users to convert multiple variables at once. 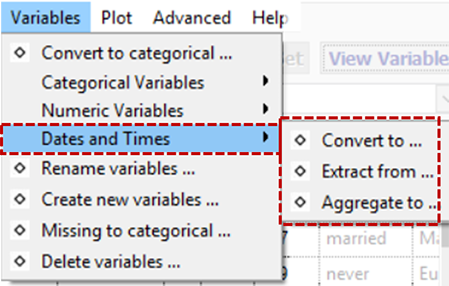 Convert a variable to a standard dates and times (POSIXct) format and saves as a new variable.

In the example that follows, Time.stamp is a categorical variable that we wish to convert to a variable that iNZight recognises as a datetime variable. 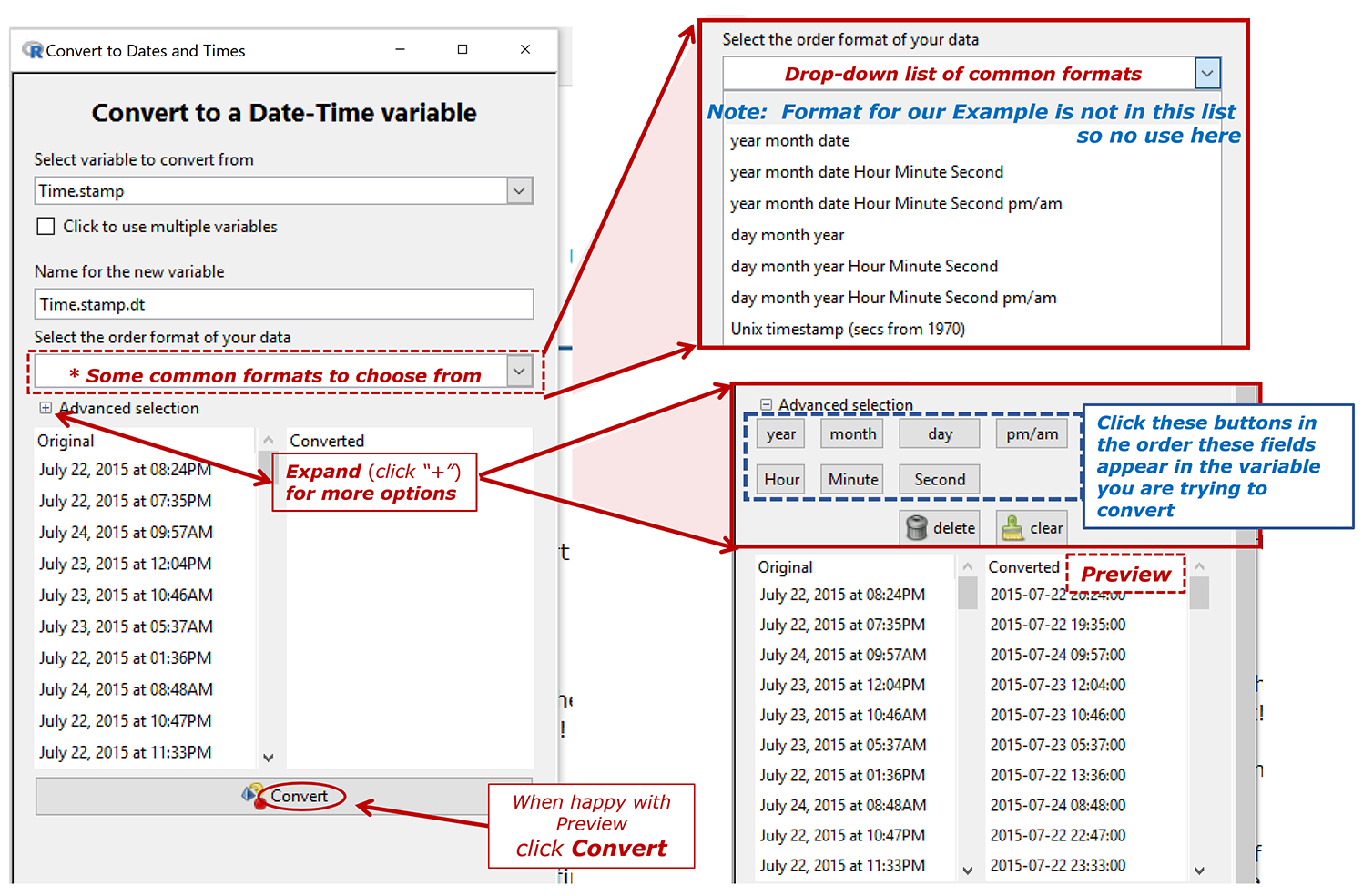 Creates a new variable by extracting specific component (e.g. data, year, time...) from a dates and times variable in a large variety of levels of detail and of format.

In the example that follows, Time.stamp.dt is a categorical variable that we wish to convert to a variable that iNZight recognises as a datetime variable Timestamp.dt. What we want to do is extract a new variable containing the Year and the decimal part of the Year ("Decimal Year") 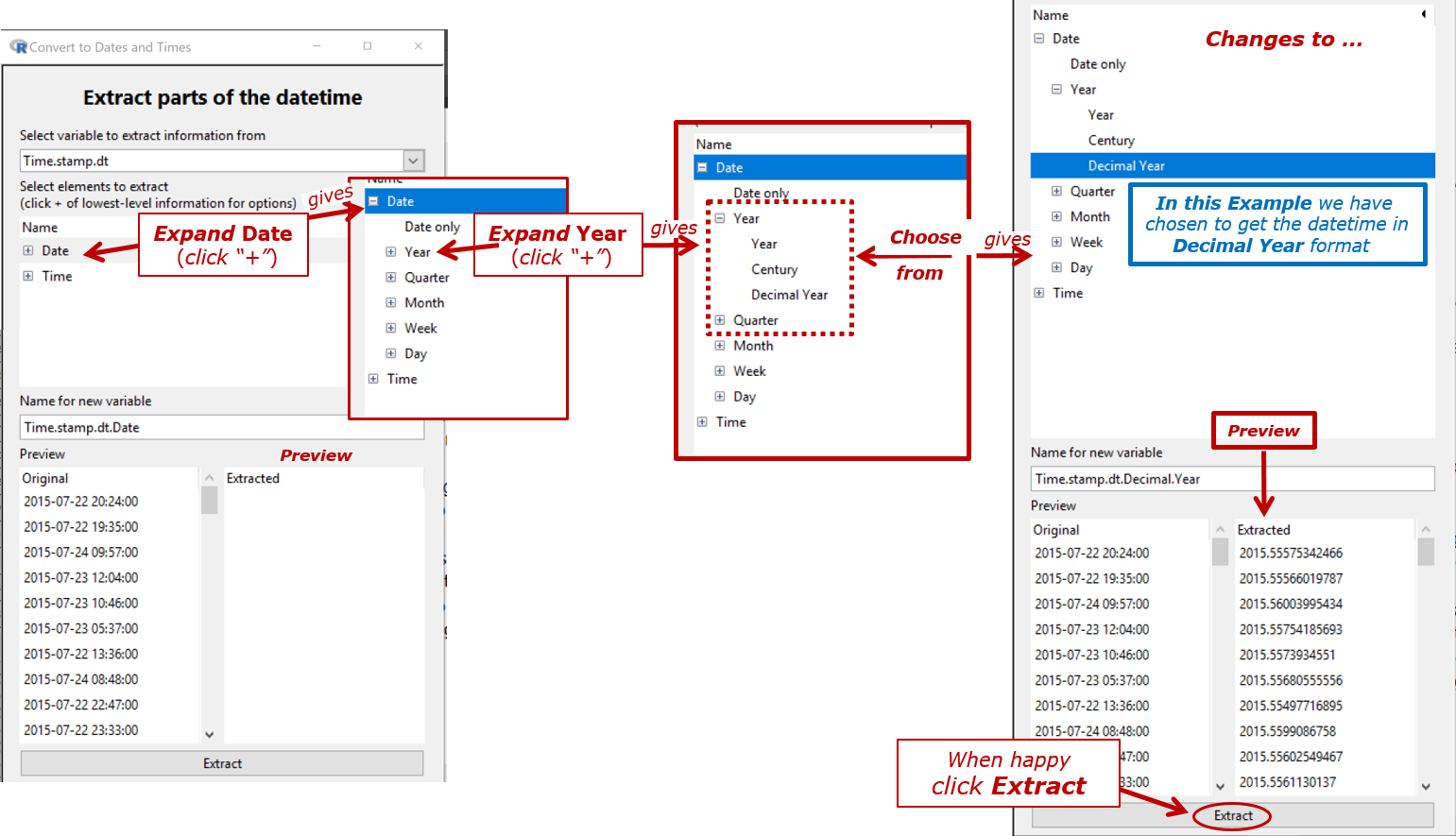 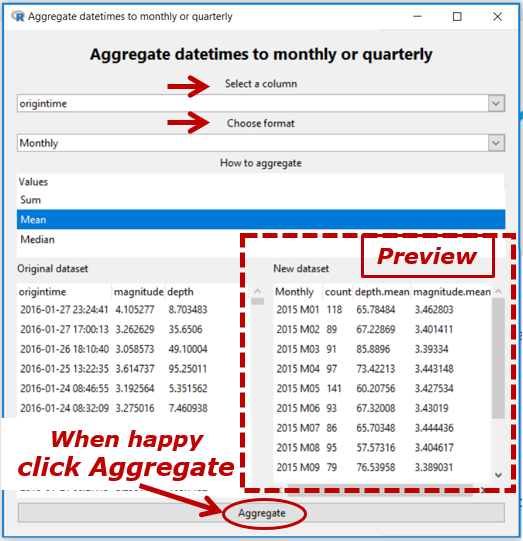 In the Example, origintime is a date-time variable [thus, annotated (t) in View Variables] and we have chosen to convert it to monthly (yyyy Myy) with all of the values in the same month aggregated to their mean.

The count column shows how many values have been aggregated. If there are missing values present in a variable being aggregated, then another column of the form variable.missing. Missing values are ignored when aggregating.


In the Example below a categorical variable in monthly (yyyy Mzz) format is aggregated to quarterly (yyyy Qz). 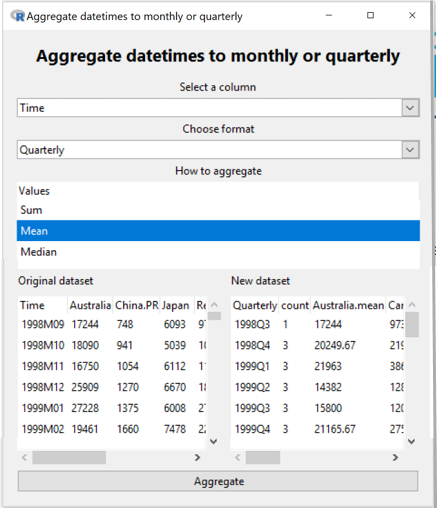 Rename variables in the dataset. Especially useful for variables created by iNZight.

A very flexible facility for creating new variables from existing variables, essentially by doing arithmetic on them.

Delete variables from the dataset. Click variable names using the Shift and Control keys to choose multiple variables for deletion.