If you have never used the Maps module

Plotting data on maps is a specialised area that is quite different from normal graphing. The article here tells you about the sorts of data that we can present using maps and ways in which we can use maps in constructing data visualisations.

The Maps module is not part of the initial installation of iNZight. It downloads and installs automatically the first time you try to launch it by going to the Advanced > Maps 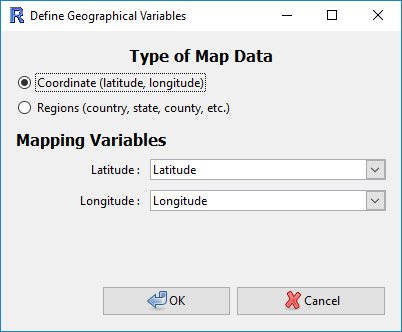 The program behaves differently depending on this choice. The documentation deals first with Coordinate data and then with Regional data.

iNZight will try to guess the Latitude and Longitude variables automatically, but you will have to select them manually if they have nonstandard names.

Once you've selected those, click OK and iNZight will now plot your data on a map (it may take a little while for the underlying map to download) 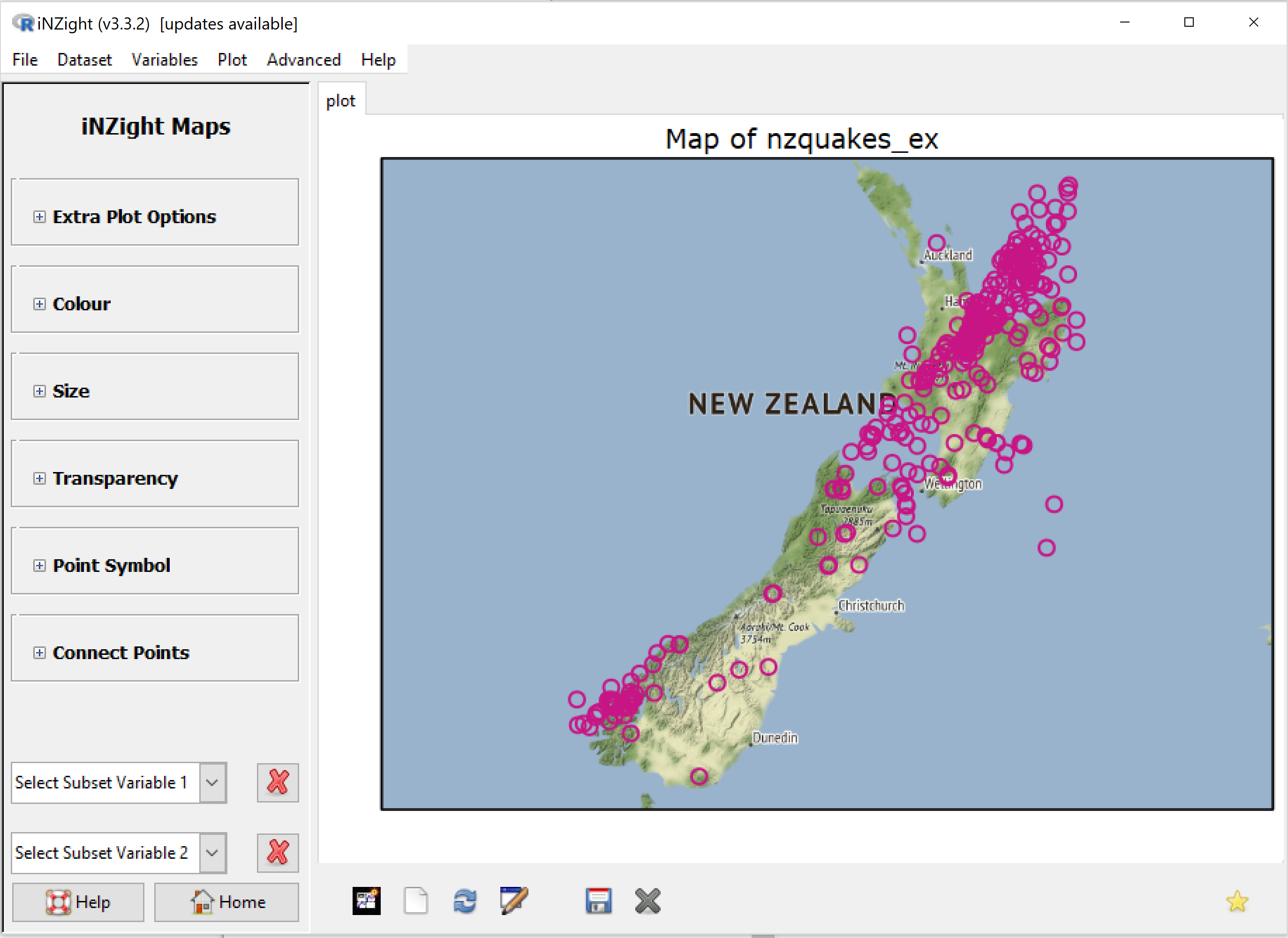 Plot appearance can be changed and information about other variables added to the plot using the following controls.

Overall point size (Slider): scale everything drawn on top of the plot/map to a chosen multiple of their current sizes (default =1)

Either choose a ...
Point colour: select a single colour to apply to all of the points
Or select the names of a ...
Colour by variable to differentially colour points according the values of the chosen variable.

Additional options which appear once a Colour-by variable has been selected:

Size by: Select a variable to differentially size the points by (i.e., size according to the values of the chosen variable)

Additional option which appears once a Size-by variable has been selected:

Overall (slider): Adjust the transparency levels of all of the points uniformly (default value 0 = no change; maximum makes all points completely transparent)

Opacify by: (Opacity is the opposite of transparency) Select a variable to differentially set the opacity the points by (high values map to most visible, low to most transparent)

Additional option which appears once a Opacify-by variable has been selected:

Filled in symbols (check-box): Click to fill in all symbols

Symbol by: Can be done according to a categorical variable which has 5 or fewer categories

Connect points with lines (check-box): Check the box to draw lines between points. Connected in the order they appear in the data file.
Additional options which then appear:
● Line colour (selection box);   ● Line width: (slider)

Works the same way as in the main part of iNZight, you can generate subsets by selecting a variable from either one or both of the subset menus.

Subset selection sliders and play buttons appear once a subset-by variable has been selected.

When you click on the Interactive plot icon (immediately above), iNZight makes a temporary interactive html file and opens it using your default browser.

To save a permanent file, click on the Save Plot icon, or go Plot > Save Plot.
Choose the interactive HTML as your file type.

These files work independently of iNZight 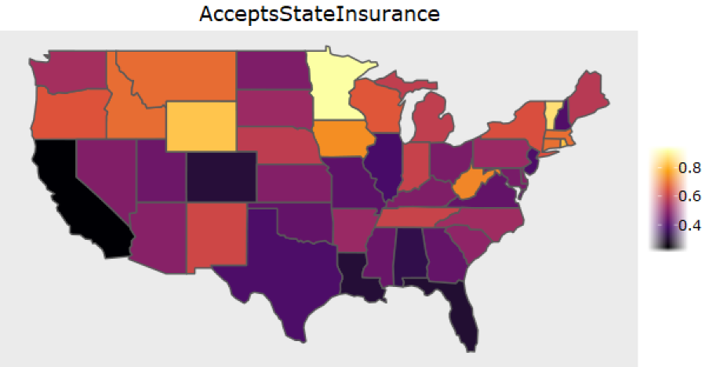 In many cases, you might have data with regional information (where "region" can be countries, states, provinces, electorates, etc.).

iNZight allows you to display this information on a map of outlines, with each region coloured according to the value of a chosen variable. (Some alternative representations are also catered for.) 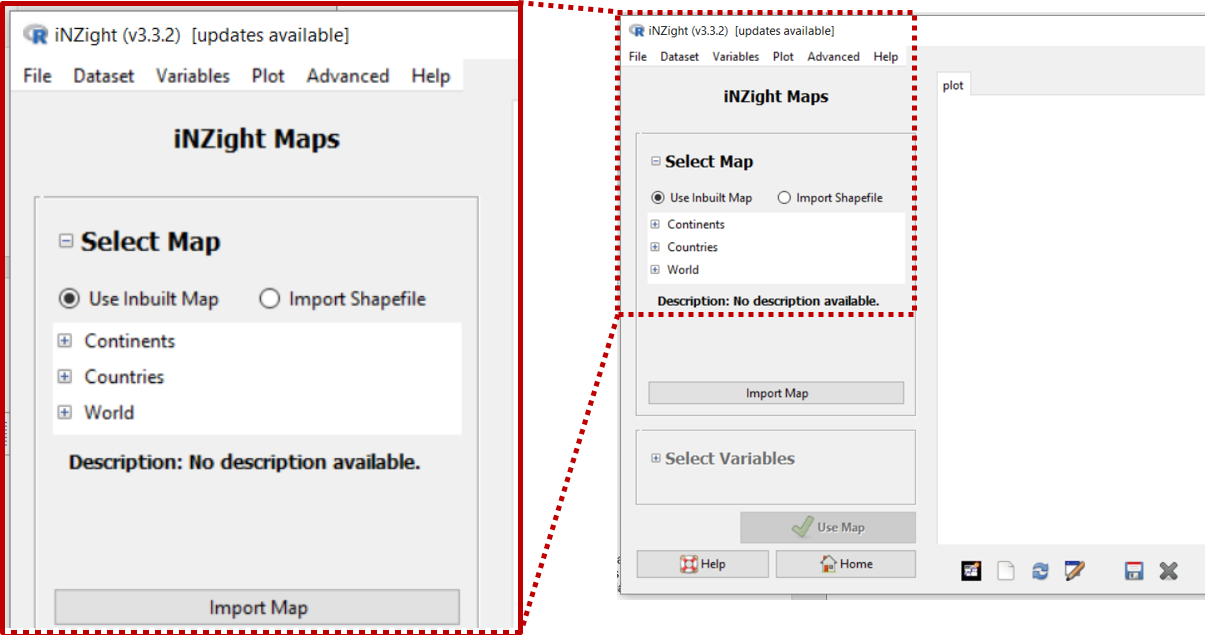 Choose either Use Inbuilt Map (default) to use one of the maps already in iNZight
(choose from a selection of maps of Continents, several Countries, and World maps)
or Import Shapefile to start up a dialog for reading a shape file stored on your computer

Double clicking on a map name in the Use Inbuilt Map section will plot a preview of the map in the plotting area and display a brief description of the map.

When a map has been imported, iNZight will also try to find a variable in your data file which best matches one of the region-naming variables on the map. It will display the names it has found beside Data variable and Map variable. Selection boxes allow you to select replacement variables for these two roles.

It will also draw the map. Regions for which data is present in the data set are shaded green.
Any Regions which have no data are shaded orange. 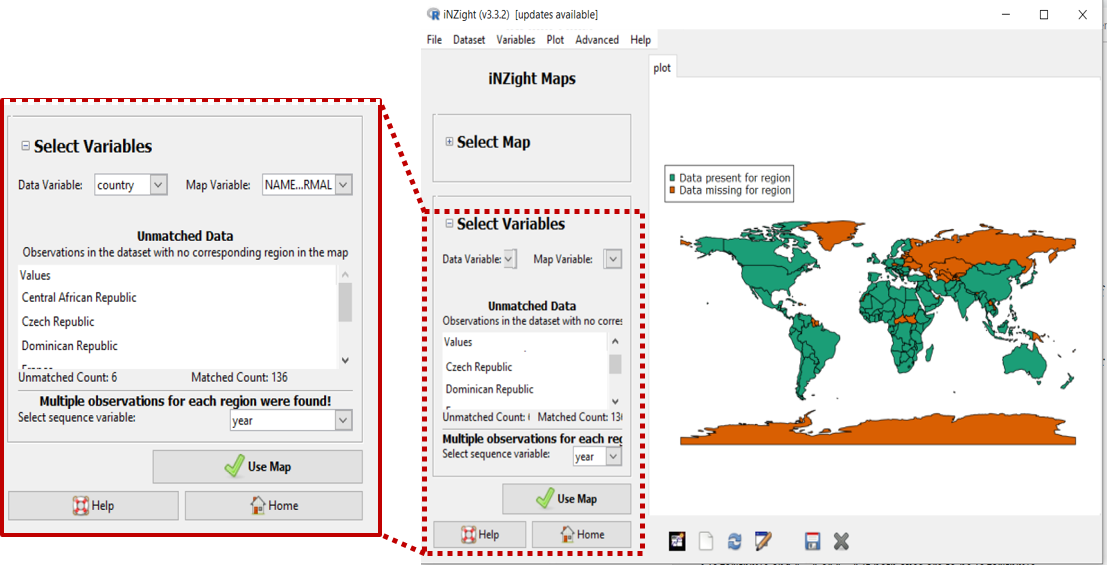 Unmatched Data:
The names of any Regions in the data that are not represented in the map will be listed here once the map has been imported. You can decide to use the map anyway or exit maps and go back to your data to do something about the non-matching names.

Use Map (Button): Click to tell the program "I want to use this map" 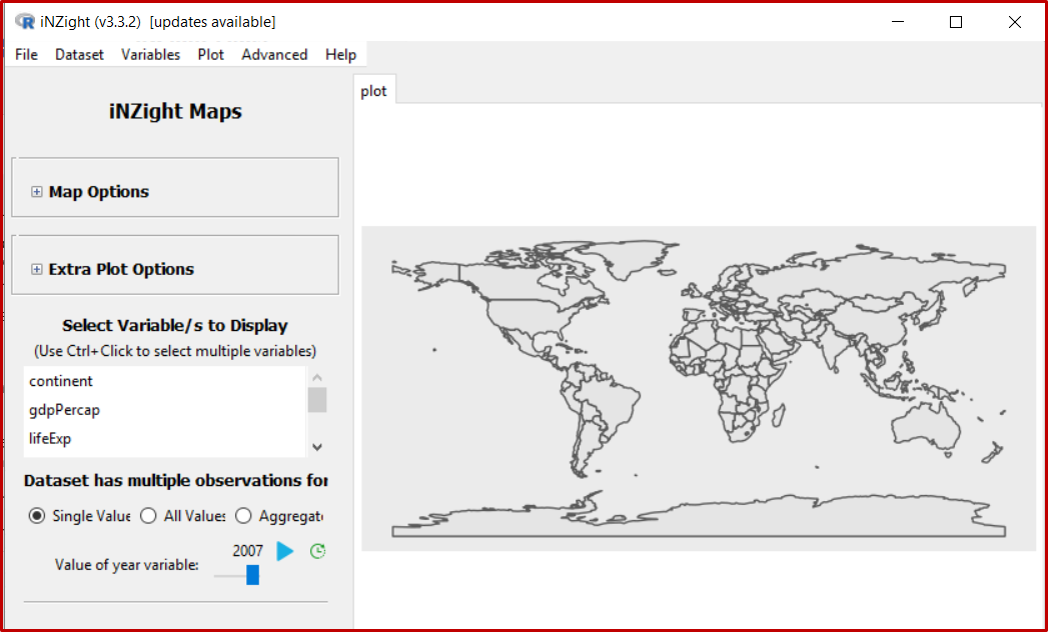 If you are using this module for the first time it is best to ignore the Map Options and Extra Plot Options paragraphs initially and see how the plotting of variables works. So that is what we are going to discuss next. 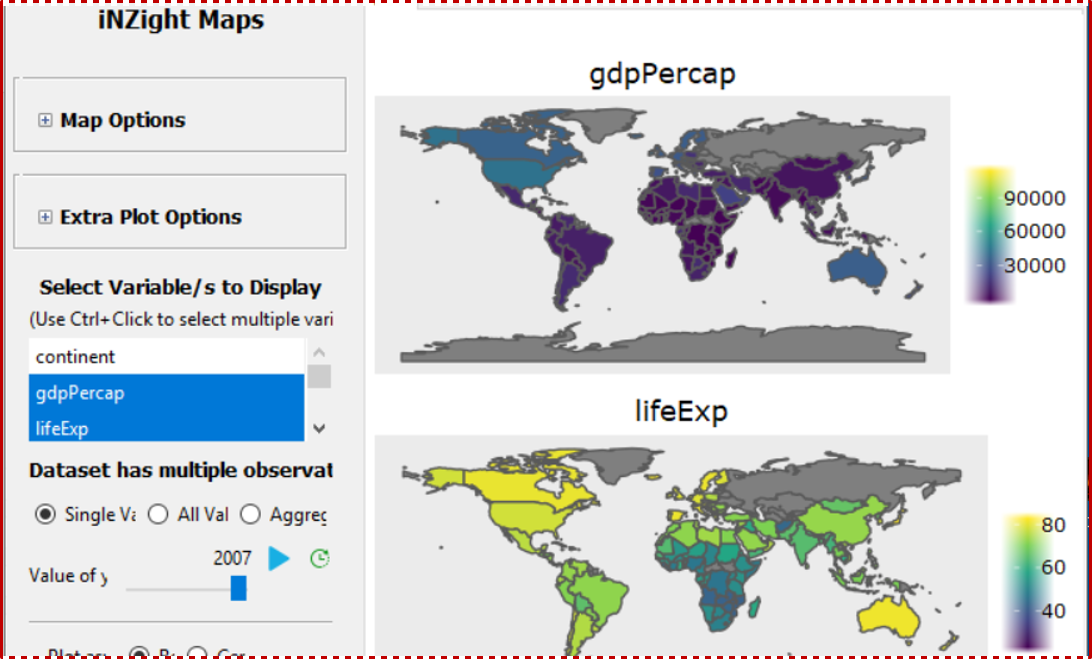 Additional options that become available when Centroids is turned on:
Size by: (typically use a relevant population-size variable)
Overall size (slider): makes the disks bigger or smaller uniformly
Transparency of map (slider): transparency of map outlines 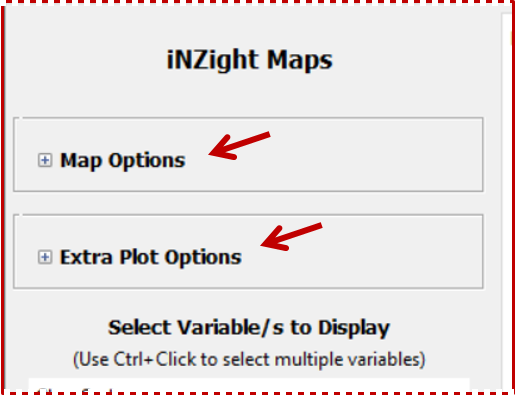 Dataset has multiple observations per region

(only appears when this is true)

When you click on the Interactive plot icon (immediately above), iNZight makes a temporary interactive html file and opens it using your default browser.

To save a permanent file, click on the Save Plot icon, or go Plot > Save Plot.
Choose the interactive HTML as your file type.

These files work independently of iNZight

Shapefiles are a method of storing geographical data for use in GIS (geographical information systems) or similar software. Despite the singular name, shapefiles are actually a collection of files that each correspond to a particular aspect of the data. Three files are mandatory:

Most shapefiles will have additional files containing other information such as map projections or indexes of the spatial distance between geometries. Shapefiles are typically stored in separate directories for each map, with all the files that make up the shapefile contained within a single directory. Shapefiles are generally distributed on the internet as archive files, e.g. ZIP files. Currently these have to be decompressed to use in iNZight.

Other shapefile-information file formats that can be used in iNZight are GeoJSON and TopoJSON files. These are a single file that stores much the same information as a shapefile by storing a geometry and set of properties for each feature in the dataset. GeoJSON can be used in most GIS software and is a standard format for web-based mapping technologies such as Leaflet. TopoJSON is a closely related format that includes topology and typically has file size that is smaller than GeoJSON as TopoJSON only stores one copy of any borders that are shared by two countries.